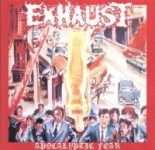 Even though this release was unleashed upon mankind a while ago (December 2002 to be exactly) I would like to introduce it here as I guess not many of our readers are familiar with this quartet from Japan. "Apocalyptic Fear" is the first official release of this Death / Thrash horde from Tokyo (after having released two demo CD-Rs in 2001 & 2002) and includes four cool tracks. The songs on this mini album are all very well executed and played with passion. You can feel that the band had fun at the recording session. The guitarists deliver some superb riffs, pending between Swedish style Death / Thrash and some old school elements. The axes vary also in the riffing. So you can hear powerful, aggressive and straight forward guitars and on the other side they incorporate excellent melody lines… even some calm moments can be found here. Well done dudes! The rhythm section pounds forward, giving the songs a solid base, either in faster or slower moments. Myousai’s vocal delivery is similar to the ones we know from Swedish Death / Thrash / Black Metal bands. But he also throws in some deeper growls and even one part with ‘normal’ vocals can be heard. So he is trying not to be monotonous. The production of "Apocalyptic Fear" is flawless. Not overproduced and with a charm of a nice underground production. There’s also a hidden bonus track on this MCD. After the last tones of the last track ‘Exist’s Agony’ and a gap of about 3 minutes you will get a bonus in form of a nearly two and a half minutes Death / Thrasher. So this four tracker is a cool appetizer for those who want to check this band out or can’t wait for the upcoming new album which should see the light of day in early 2005. For more info and merchandise please get in contact with the band at http://homepage3.nifty.com/exhaust-freedrunk/ or exhaust@metal.nifty.jp.