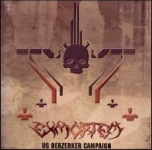 Considering the fact that the original version of “Berzerker Legions” is only about half an hour long, it was really a cool idea to use the six tracks of the band’s 2003 “Pest Campaign” EP as additional bonus tracks for this re-issue here. But as far as I know, it actually is only meant for the US market though, as “Berzerker Legions” wasn’t properly released overthere, which is a shame in every aspect, really, cause when it comes to brutal US style Death Metal, Denmark’s EXMORTEM are definitely on the forefront of this new generation. Skilled musicianship, a cool production and the necessary brutal intensity easily reminds you on bands from abroad, so I really have no idea why EXMORTEM aren’t as popular as all those other acts yet, especially considering that they already have four full length albums out. Blame it on their country of origin maybe?! Lack of real label support? Probably… Anyway, apart from the kinda stupid new coverart (the original “Berzerker Legions” cover is luckily on the backside of the booklet as well), this re-release became even more exciting, due to three additional, crushing live versions of ‘Berzerker Legions’, ‘Into The Realm Of Legend’ and ‘Icecold Ugliness’, a newly recorded version of ‘Intoxicated By Death’ (originally to be found on their 1995 debut “Labyrinths Of Horror”), an unreleased track (‘Killstorms’) and a cool AUTOPSY cover (‘Critical Madness’). So, if you haven’t added “Berzerker Legions” to your collection yet, make sure to get yourself a copy of this version (you still might be able to get this through various mailorders overhere)! Afterwards you’re hooked anyway and ready to buy the follow-up “Pestilence Empire” as well. Excellent! For further info check out www.exmortem.com