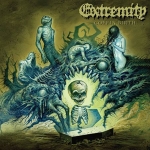 Last year’s debut EP "Extremly Fucking Dead" by Oakland (USA) based EXTREMITY caused quite an uproar. For both the line-up and the music. Some people considered the band as a kind of Bay Area extreme Metal super group, because the members (currently Marissa Martinez-Hoadley, Shelby Lermo and Aesop Dekker) are or were active in outfits like CRETIN, VASTUM, REPULSION, VHOL and AGALLOCH, to name just a few. And although EXTREMITY did not re-invent the wheel, the EP knew how to please the audience. One year later the first full-length is unleashed, making clear that the band is not just a one-off project. "Coffin Birth" brings you eight tracks full of extreme Metal, wrapped in a perfect sound, which means very organic and but still clear and forceful. The music itself is difficult to describe, from a larger point of view I would say Death Metal. But every song benefits from a special influence or vibe, making it unique but not leaving the main field Death Metal. Since track by track reviews are boring (at least to me and everyone writes reviews the way he / she would like to read) I am going to put it this way. Grindcore influences, EXHUMED and especially CARCASS during blessed times of "Symphonies Of Sickness"; milling mid-tempo in the vein of BOLT THROWER; late 1980s Swedish Death Metal (I have sensed huge GRAVE influences) and some interspersed Thrash Metal riffs. Of course one could say, I guess if you are located in the Bay Area you can not escape it. Another important aspect: the vocals. Some shrieks here and there, but mainly the well-known deep grunting, which makes the Death Metal enthusiastic think of Karl Willetts and all others run away! All people who still listen to Death Metal released at the end of the 1980s / early 1990s should definitely check EXTREMITY out at www.facebook.com/extremedeath, www.20buckspin.com