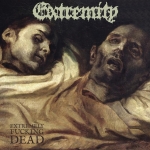 Things seem to be going really good with EXTREMITY these days. They have their debut album coming out soon on 20 Buck Spin and they are also opening up for Death Metal gods ASPHYX on their West Coast tour of the USA. Yep, you can say things are on the up and up with them. Hailing from Oakland, California, these old school Death Metal regenerators consist of Shelby Lermo (VASTUM), Aesop Dekker (WORM OUROBOROS, LUDICRA, AGALLOCH), Melissa Martinez-Hoadley (CRETIN, REPULSION), and Erika Osterhout (NECROSIC, SCOLEX, TREPANATION). The band does a nice job of getting a good mix of several 90s Death Metal bands (INCANTATION, ENTOMBED, GRAVE, etc) and shaping it into some entertaining songs even the album cover art is even in the old school vein). The intro from Pet Semetary really sets the atmosphere nicely with a gloom / doom vibe only to have it jump into high gear with the track ‘Crepuscular Crescendo’ with relentless guitars and tempo shifts. The next track is my favorite on this album, ‘Bestial Destiny’ runs through like a freight train without a conductor at the helm and is a flat out badass song that really showcases the band. ‘Chalice Of Pus’ conjures up a that older era INCANTATION sound with fast riffs, tempo changes, and punishing drums. The song also has some sick guitar solos that further enhance the jam. ‘Fatal Immortality’ and the title track ‘Extremely Fucking Dead’ round out the rest of the album further continuing the mayhem. At times this album had some solid melodic moments but also have that devastating sound that quickly thrashes things up. The drumming is really killer, but then again I wouldn’t expect anything less from Aesop Dekker who kept time for the mighty AGALLOCH. This was my first time checking out EXTREMITY and I have to say that this album was indeed a pleasant surprise as these guys have the right formula while bringing back nostalgia. A solid debut that has 6 tracks and clocks in at just under 27 minutes while at the same time it leaves the listener wanting more. The production and guitar solos really do stand out and kick the album up a notch. This is a must for those that love that old 90s sound and remember they are on tour… check them out if you can. For more info: www.facebook.com/extremedeath, www.facebook.com/20buckspin