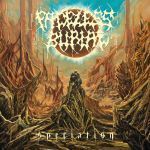 Released via Dark Descent and Me Saco Un Ojo Records, “Speciation”, the second full length of the Australian FACELESS BURIAL, comes three years after their debut “Grotesque Miscreation”, and with this they sound more mature and varied from their first effort. Inspired heavily by the American bands from the early 90s and also caressing European schools, “Speciation” contains thirty-seven minutes of visceral Death Metal that recalls many of their influences, yet still manages to be fresh and full of character. The disc opens with ‘Worship’, which starts in fury with raw and violent blast beats and fast riffs, but not even a minute passes that several changes of tempo begin to take over the scene. In this piece, as in the five following, an old school Death alternates with more Prog and dissonant moments, making everything modern and, at the same time, old school. With traits that sometimes recall Scandinavian sounds and sometimes the American ones of the 90s, the album flowed with the incredible riffs and brilliant solos placed at the ‘Limbic Infirmary’, re-creates the transitions and movements of classic GORGUTS era. The precise drums with the snare sound of ‘Irreparably Corpsed’ paid fantastic tribute to classic DEATH era. When the guttural and gloomy voice of Alex McFarlane accompany us up to ‘Speciation’ and ‘Spuming Catarrhal Gruel’, you would know that drummer Max, from Grindcore beast INTERNAL ROT, added his own unbridled anger and consequently freedom with depth in each track. ‘Ravished To The Unknown’, a song that concludes this work, combines influences from different sub genres, to form an engrossing and intense composition that will manage to hold your interest from start to finish. The trio certainly shows in six relatively long songs that they have enough ideas and imaginations to keep a milked-out genre like Death Metal alive. No doubt, there is plenty to ponder upon, but nowhere does the band overload you with unnecessary hassle. The goal remains to play brutal Death Metal with frenetic playing and noteworthy movement, by perfectly honoring the gritty and haunting aesthetic components that made Death Metal so beloved during the 90s. Recorded by Finn Keane at Headgap Recording Studio, mixed and mastered by Pete deBoer at World Famous Studios, Colorado – the album has a powerful production, which is rendered in authentically analogue tones and further underlines the band’s reverent devotion to Death Metal classicism. Although the band isn’t doing anything groundbreaking or utterly unique, they have a tight formula that’s heavily rooted in old school Death Metal. Represented with a Seagrave lookalike artwork (here by Xavier Irvine), it smells of Death Metal in the classic vein of old DEATH, IMMOLATION, SUFFOCATION, GORGUTS and CRYPTOPSY and should be explored by any followers of brutal, intense and absolutely wild Death Metal without fuss and bullshit. To find out more about the band and label, visit www.facebook.com/faceless-burial-212752096061839, www.darkdescentrecords.com.