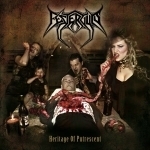 Formed in 1993, it’s been a long path for FESTERGUTS to release their debut album. After 2 demo tapes and 2 EPs, finally "Heritage Of Putrescent" hits the streets via More Hate Productions. Straight from Russia, these 4 guys and gal have crafted a great debut album. The production is almost perfect. Great mix where all the instruments are heard and the vocals stand out as they should. There’s only one thing that bothers me. The programmed drums. Even though the sound fits in with the recording, the programming is not so varied and some times, it reaches that "inhuman" factor that smears the obvious machine-like playing all over your face. But if you can look past that, the band delivers a relentless attack of sharp, almost technical Death Metal. But they are no common band either. Besides the tremolo-driven riffs, the fast drumming, the pounding bass lines and the furious vocals, they have added two variations that definitively sets them apart from your regular gore-soaked sub-genre: keyboards and female operatic vocals. But they have managed to use them in a way that perfectly suits the songs and they add enough variation to the experience. I was pleasantly surprised about it. The atmosphere they created is evil and creepy. Add to that the well-laden keyboard hits and pads and you’ve got yourself a really good album that never lets you down. They have not invented a new genre, but FESTERGUTS are brave enough to use non-traditional instruments and vocals successfully. They don’t sound forced at all. So, give them a try and buy their album, because they do deserve it! Contact the band here: www.festerguts.com, www.facebook.com/festerguts. Or you can contact the label here: www.morehate.com