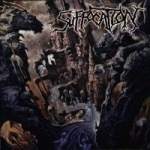 This is probably THE most anticipated reunion album in the entire history of Death Metal! SUFFOCATION, the masters of brutal Death, have finally returned to the scene after an almost six year long abscence. And even though they still know how to deliver brutality in perfection times have drastically changed ever since their last offering “Despise The Sun” reared its ugly head, and tons of new bands have took over and / or brought SUFFOCATION’s style to a new level. Which means, that despite the undenyable musical qualities of “Souls To Deny”, I’m pretty sure that it won’t have the same impact on the scene as the guys used to have back in their early days when “Human Waste” or “Effigy Of The Forgotten” came out. So, let’s face the facts: nowadays we simply have tons of brutal bands that mix sheer brutality with high technical abilities – from DISGORGE to KRISIUN to HATE ETERNAL (just to name three rather different, yet like-minded ones) and SUFFOCATION have become just one of this movement as opposed to being the outstanding leaders they used to be. Don’t get me wrong, all of the eight featured new songs on this album are perfectly executed and wellwritten examples of brutal and rather twisted US Death Metal. But from a band like SUFFOCATION I simply expected a little bit more and less safe sounding, yeah probably even with more sickness incorporated instead of an album that easily could’ve been done in a similar manner by a good handful of other skilled bands of this particular genre. It simply lacks identity. Period. Solid, but certainly not groundbreaking! It once again comes with another great Dan Seagrave coverart though. The official release date in Europe is May 19, so don’t start to look for it earlier. For all further info check out www.suffocation.us or www.relapse.com