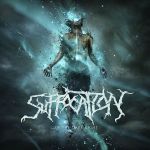 When you’ve been releasing music for almost thirty years, fans generally tend to, when asked how they like the new album, reply in a manner such as "Meh" or "Pfft". But with Long Island’s SUFFOCATION, you get an entirely different response… more like "Fucking awesome!" And it’s no shocker. These Death Metal masters have been delivering nothing but excellence since 1990’s "Reincarnated" demo. Their eight full-length "…Of The Dark Light" crushes us with brutality once again. The opener ‘Clarity Through Deprivation’ doesn’t give any warning before it bludgeons us with schizophrenic guitars (Terrance Hobbs and Charlie Eddigo), lightning-fast drumming (Eric Morotti), throbbing basslines (Derek Boyer) and sickening vocals (Frank Mullen). ‘The Warmth Within The Dark’ chugs along rapidly and steadily, as ‘Your Last Breath’ echoes familiar territory before furious fret-filled riffing escapes from its nail-riddled tomb. The fourth track ‘Return To The Abyss’ does just that. Frank’s guttural and scratchy vocals lead us down, down below. ‘The Violation’ stumbles through a blurry mish mash of chaotic guitars and brain-draining drumming that makes you appreciate the complexity of the track and the talent of the band. It’s mind-numbing, really. Almost three full decades in, and SUFFOCATION keep providing us with forward-thinking Metal brilliance. ‘…Of the Dark Light’ is another fast-paced monstrosity. ‘Some Things Should Be Left Alone’ climbs and climbs, dishing out more than our puny souls can withstand. ‘Caught Between Two Worlds’ is a miasma of more ever-changing guitars / drums while still maintaining a steady rhythm is its beautiful diversity. And the final track ‘Epitaph Of The Credulous’, with its berserker mentality and neck-breaking bass runs, ends the album with a satisfying… no, glorious abomination of sheer metal ecstasy. SUFFOCATION are always a force to be reckoned with. Don’t let the band’s tenure throw you. Their years of writing monolithic Death Metal madness is true testament that a band’s love for what they do will shine through into their music in ways that simply make us praise them more and more. For more information, check out www.facebook.com/suffocation, www.nuclearblast.de