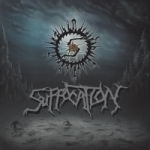 Since I listened to the new album of the true fathers of brutal Death Metal, SUFFOCATION, for the first time, I knew this review would be quite hard to do, as it is almost impossible for me to say anything bad about this New York gods. Anyway, I’ll try to be the most objective I can. One thing is quite clear here, this one is more brutal and straight into your face than its predecessor; in fact at the beginning I felt like they had recorded a less inspired album (the first two listens didn’t give me a good feeling), but the reality is that with a few more listens you see that the riffs are not so obviously melodic, although still with a lot of melody and groovy as some on “Souls To Deny”. They are more twisted and technical and with a lot of variety in tempo (as always), but especially heavy and groovy. The songs here are truly fucking heavy, mainly thanks to Mr. Mike Smith, who is as brilliant and demolishing as always. The vocals are sometimes just in the same way as on their previous works and in others a bit deeper too, but keeping the wellknown style of Frank Mullen: understandable and not extremely guttural, but powerful as very few growlers in the whole scene. But one of the most surprising things here, in my point of view, is the really good production (even better than on “Souls To Deny”), so well-balanced that any detail can be distinguished here (you can almost imagine how the drummer is moving his hands in every second), and all of this as powerful as always. I cannot say much more here I think, those who like Suffocation won’t be disappointed by these ten new tracks (if we forgive the intro), which will blast everything live, as they are clearly composed for live shows. Perhaps some won’t like the cover too much, as it is a bit different to the ones they used to have, but it reflects the darkness within (yes, ok, that logo with the S could have been removed, but the whole would have been a bit empty). The gods are back! More info: www.relapse.com