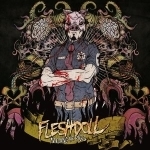 France has always been some sort of ‘hot bed’ for some killer extreme Metal for many years already, although not as known or famous as for example Sweden that produced quite a few strong leading names of Death Metal – especially during the late 80s and early 90s, that really managed to set some quality standards for the whole extreme Metal genre for many years to come. FLESHDOLL (what a cool band name, by the way), this French extreme Metal quintet, was formed in 2001, and since then they have put out 3 full-length studio albums, off which their latest 3rd album is called "Feeding The Pigs". FLESHDOLL rely on a pretty straightforward Death Metal, also borrowing something from the Thrash Metal territory in the form of a cool set of riffs but mainly blasting out with some enormous speeds and brutalizing our eardrums just the best they possibly can. They also combine something from the past – as well as something from the modern times’ Death Metal, without really putting too much on emphasis on getting locked into some certain sub-genre of extreme Metal music. Partly that does work for them indeed; the songs having enough sort of a punishing ground in them that make you to tolerate them the more, the more you get exposed to the songs’ so-called ‘hurting elements’. In the other side of the coin some negativism can also be targeted towards this French quintet. Every time when they decide to drop down some of their speed – on almost a ‘dead moment’ level, that’s when they start to sound tedious and just boring. At best they are when they keep the tempos a bit faster than experiencing a granny cruising with her walker in the red lights – plus of course, whenever they decide to switch their relatively brutal and fast Death Metal mode into those a bit more atmospheric parts, that’s when they start to shine again for their own advantage. All in all, I must admit that "Feeding The Pigs" is a nice and solid release, so don’t let your fingers itch any longer – just grab this for yourself if you can. For more information on FLESHDOLL, follow your steps into this url: www.facebook.com/fleshdolldeathmetal, label: www.greatdanerecs.com