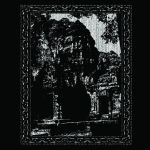 When I was a child there was a kind of carillon in the local shopping mall and the intro of “Templum Imporium” reminds me exactly of that. Quite strange, a Black Metal album evoking memories from your childhood. But that’s the way the human brain works. Only a few weeks ago I have written a review for “The Prospector” and this release, also originally released in 2020, is the second full-length by Indonesian based FORBIDDEN TOMB. It is not surprising that all trademarks of the predecessor are again present. Which are fast played tremolo riffing Black Metal with some dragging slower parts. And again the vocals are distorted as far as it is possible. Hard on the verge of being audible, but not such a noise as ILDJARN. Compared to its predecessor, however, one thing has changed. At least there are song-titles now. If this continues at that pace, then maybe we will get some information on the next albums about the band members or a proper cover artwork. But maybe blurred black and white photos are part of the concept, just like the short playing time. But enough grumbling, “ Templum Impiorum” is a real pleasure for friends of the second wave of Black Metal in its rawest way. Fans of early GORGOROTH may visit https://forbiddentomb.bandcamp.com or the label site here www.facebook.com/morbidchapelrecords