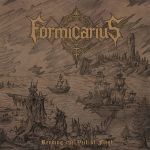 I like the album cover. I really do. Something about it catches my eye. But… sigh. The album itself? Not so much. Maybe it’s me. Maybe it’s just a different style than I normally dig. So let’s analyze it, shall we? London’s FORMICARIUS have released their second full-length “Rending The Veil Of Flesh’. The Black Metal scene in the United Kingdom is sometimes a little ehhhhhhh. I’m not sure what it is. You have Norway with its drama in the 90s, Finland with its aggressive, screeching blasphemy, South America with its barbaric, Satanic dungeon Metal… and England with its… well, hard to define. ‘Beyond The Veil Of Flesh’ begins with a track of awkward production. The guitars and drums are sort of everywhere. And the vocals sound like someone trying a little too hard to sound evil. ‘Dieu Et Mon Droit’ starts with acoustic guitars and… horns? I feel like Kenny G is invading my Metal world. I appreciate new sounds in Metal. However… horns I have a problem with. And eventually there’s an attempt at singing in a growly voice. This hardly ever works. If you’ve listened to SIX FEET UNDER’s tribute to IRON MAIDEN and JUDAS PRIEST on “Graveyard Classics IV”, my point will be proven. ‘Within The Depths’ has a symphonic vibe while ‘Early Will I Seek Thee’ has spoken word at the beginning (which is a pet-peeve of mine). ‘Inherit Our Sickness’ creates a somewhat creepy vibe. But damn… I just can’t get past the vocals. ‘The Fourth Horseman’ and ‘Stalker Among The Stars’ have rather enjoyable guitars and keyboards while ‘Crimson Purge’ winds its way upward and back down in a montage of guitars that evoke a good bit of talent involved. ‘O, Dread Impaler’ ends the album with a sort of epic sound and one of the most upbeat in the bunch. Again, maybe it’s just me. But “Rending The Veil Of Flesh” is pretty much a tough listen. The band itself has the talent, but simply deliver an album of songs that never really grab me while hoping the vocals evolve into something less teeth-grinding. Unfortunately they don’t. For more FORMICARIUS information, check out www.facebook.com/formicariusband, www.schwarzdorn.de