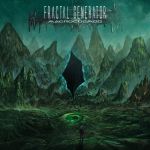 FRACTAL GENERATOR from Canada are active since 2008 and after their self-released debut “Apotheosynthesis” from 2015 they finally give their label debut in form of “Macrososmos” via Everlasting Spew Records. The title track ‘Macrocosmos’ is technical Death Metal at its finest. Enriched by a good doze of Industrial Metal mixed with a technical sci-fi touch, they sound like a technical Death Metal version of FEAR FACTORY or STRAPPING YOUNG LAD. Here and there a bit of Grindcore gets incorporated and the apocalyptic keyboards really create a pretty menacing atmosphere. ‘Aeon’ starts like a fast blastbeat version of ‘Lunatic Of God’s Creation’ and convinces with its Grindcore edge and technical instrumentation. Especially this stands out as the drumming is on the highest technical level, the guitars are shredding as hell and the keyboards in the back always fit in pretty well. But also when they slow down, the band creates a good atmosphere and well-dozed samples and sounds work well in the songs. ‘Serpentine’ continues technical, but far rawer and could easily have fitted on the last DYING FETUS output while ‘Contagion’ again has a DEICIDE touch, just a lot faster and rawer than the guys from Florida did it back in the days. The track leads into some spacy sci-fi sounds in the middle. ‘Shadows Of Infinity’ stands out once again with fantastic drum work, cool guitars and spacy technical interruptions. Worth to mention is the fantastic clear production, the intense grunts and the well-done keyboards, and I normally hate keyboards. Fans of technical Death Metal paired with an industrial edge will definitely dig this album and I am pretty sure that we will hear more from FRACTAL GENERATOR in the future as I would guess NB Records would have loved to sign them, but our Italian friends from Everlasting Spew were quicker. More info at one of the following sources: www.facebook.com/fractalgeneratorofficial, www.facebook.com/everlastingspew