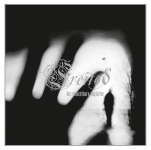 Third album of German depressive Black Metal outfit FREITOD, which I would personally deem as Dark Metal / Suicide Rock since although being a relatively heavy band, the duo diverges considerably from what the former tag usually conveys musically wise. FREITOD’s music is miles away from the bleak and cold inducing feeling most depressive Black Metal tend to present. Instead, the band performs a more passionate and dark set of catchy guitar melodies, interweaving the very characteristic Black Metal screams with clean voices that masterly transit verses and choruses, and if only this reviewer understood any German, it would certainly add the lyrical passages some more vivid tones. I sense some kind of strange Teutonic meeting between MOONSPELL and WARLORD (yes, the classic American Heavy Metal band!) that gives FREITOD an epic or heroic touch to their grieving tunes. “Der Unsichtbare Begleiter” is still a down-beat album, but one that provokes a contemplative mood rather than a tormenting one. An elaborate suicide letter, rather than the leap itself. The album opens with ‘Unter Schwarzen Wolken’ and other six tracks follow through similar music structures employing strongly defined choruses and other alike passages that are recalled along the album, a feature that reminds me, to great extent, of masterpieces such as ROTTING CHRIST’s “Triarchy Of The Lost Lovers” and KATATONIA’s “Dance Of December Souls". If I had to pick a favourite song, I’d find myself between the abovementioned opening track and the closing one ‘…Und Am Ende War Das Nichts (Abwärts II)’, for they serve the album perfectly, be it hitting the listener instantly with the captivating atmosphere the album comprises or closing it with exasperating intensity, although this seems to be an album I am likely to change my favourites at times until I’m hooked on each song individually… or hanged, if you will. All further information at www.facebook.com/pages/freitod/179797205400707, https://freitod.bandcamp.com, www.van-records.de