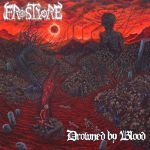 FROSTVORE, a horde hailing from Japan, are unleashing their first beast in form of “Drowned In Blood”. The band has been active already since 2012 under the moniker FROSTBIDE and changed the name to FROSTVORE. Japan is pretty well-known for loving Metal, especially classic Heavy Metal and melodic Death Metal but FROSTVORE took a different direction and offer the classic HM-2 sound from Stockholm. Especially DISMEMBER seem to have been a big influence to their sound, but also some ENTOMBED and DESULTORY appear here and there. What I really like is the fact that their sound is pretty fresh and unused like an old demo from the early 90s. Some AUTOPSY also appears occasionally when they slow down the speed and go into a more doomy direction. It is pretty difficult to describe their spirit as I often thought they have the experimental craziness of projects like PAN.THY.MONIUM as some of the tracks have a kind of Jazz note, but of course with a Death Metal painting. The songs sound wild but are matured and tracks like ‘Path To Your Tomb’ are very cool. They are dynamic and straight to the point, so the running time of nearly 33 minutes is more than enough and make this album a good and diverting trip back into the good old 90s. The production is clear and powerful and sounds like from Sunlight master Tomas Skoksberg himself. A lot of bands are playing this ancient style nowadays but FROSTVORE somehow spread the old spirit of the very first releases of the 90s and this fresh vibe is what this style needs nowadays. I hope there is more to come in the future. For more info, please check the following sources: www.facebook.com/frostvorejapan, www.facebook.com/testimonyrecords