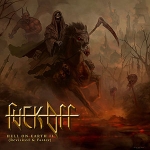 As some of you might have noticed, forgotten Spanish Thrash Metal pioneers FUCK OFF have resurrected in 2010. After a re-release of their first album “Another Sacrifice”, re-named to “A Different Sacrifice”, in 2012 and their mediocre comeback album “Smile As You Kill” a year later, their label Xtreem Music now re-releases the band’s second album “Hell On Earth”. Yet, this in not an ordinary re-release. Thus renamed “Hell On Earth II (Revisited & Faster)”, we have a bunch of songs in new versions here. FUCK OFF recorded seven of the ten songs of the original album anew and added eight more songs as well. The songs from the original album are not spectacular, since they again prove why FUCK OFF didn’t gain much attention in their first period of existence around 1990, when the “Hell On Earth” was unleashed for the first time. It’s only ‘Embraced By Religion’, the new version of ‘Inquisicón’ in English language, that raised my attention a little more in this random Thrash attack. So it’s up to the extra tracks to save this release. The first one seems to have the potential to do so. ‘Torquemada’ was recorded as a demo in the year 2000 under the moniker INVASION with two FUCK OFF members. This raw Thrash tune has a certain charm, maybe due to the fact that it is sung in Spanish. The short MAIDENesque instrumental ‘Cyclone Pt. IV’ is from that same session. But then boredom starts to set in again, because the new “long versions” of ‘Hell On Earth’ and ‘Midnight Confession’ are no better than the other versions on this disc. In the end, we have four more songs from the album in so called “1989 Single Versions”, but somehow they sound like the original album versions anyway. ‘Witch Below The Belly’ includes the intro ‘Embrion’ as well and sounds a little better and ‘Inquisición’ sounds a lot catchier in Spanish language. And the for the third time ‘Hell On Earth’ and ‘Midnight Confession’ is way too much now. After nearly one hour of FUCK OFF, there’s only one question left: does the world need this re-release? I should say: No!!! If you’re likely to think different, check out www.facebook.com/pionerosdelthrash or www.xtreemmusic.com