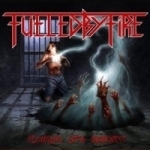 Cali-Thrashers FUELED BY FIRE have arrived back to us with their 2nd album, "Plunging Into Darkness", which has been out in the States for quite some time already, released by Annialation Records at the end of 2010. Finally there’s an European date coming up for this, which is gonna be April 27, 2012. Having heard the band’s debut release (titled "Spread The Fire"), which basically left sort of a ‘so-so’ impression on me at best, "Plunging Into Darkness" comes from the whole different planet: this is some kick-ass Thrash Metal that begs no mercy but simply offers a violent, punishing kick straight somewhere to a listener’s groin area. The riffs are overall good or very good thoroughly, the vocals of Ricardo Rangel have a necessary amount of rawness with those old school-ish Thrash screams that no true Thrash Metal act can survive without, the solos are blistering, to-the-point outbursts without any annoying, prolonged fretboard race of fast fingers but most importantly, everything on this record sounds as convincing, as true Thrash Metal should sound like in the first place. Thrash was meant to sound violent, raw, ripping and all that, remember? Whenever a new Thrash Metal release like this is unleashed to the Metal markets, one pretty much forgets the whole ‘Thrash is dead!’ slogan because albums like FUELED BY FIRE’s 2nd offering proves true Thrash Metal is far from being dead. On the contrary, it only shows to each of us that some people are skilled enough to enter their own little time machines and fly 25 years back in time; to those certain times when a firm backbone for a classic Thrash Metal sound was created. "Plunging Into Darkness" could well belong to the heydays of 80s Thrash; its musical recipe is the same and I guess I am not the only one here to say that there’s some of that same vibe and feeling on "Plunging Into Darkness" that can be found from DARK ANGEL’s "We Have Arrived" and VIO-LENCE’s "Eternal Nightmare" records. Gotta love that evil, hostile and nasty Thrash sound that FUELED BY FIRE’s "Plunging Into Darkness" is pretty much full of. Fuckin’ essential Thrash here, I would say. www.fueledbyfire.webs.com, www.noiseart.cc

FUELED BY FIRE - Trapped In Perdition - by Luxi Lahtinen