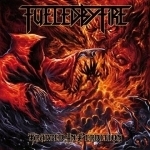 Californian Thrashers FUELED BY FIRE return with a violently storming monster of a new album that is also the band’s 3rd full-length album, titled "Trapped In Perdition". Thrash Metal – the old school kind, has been the name of the game for these 4 lads ever since they put the band together back in 2002. "Trapped In Perdition" continues their tradition to keep the Thrash Metal ball rollin’ viciously sounding for them. It’s just that this time they have seen it also necessary to suck in some elements from Death Metal riff wise, much like the opening song called ‘Catastrophe’ clearly proves it so loud and yet so shamelessly. You got a healthy dose of reminiscences of "Leprosy" era DEATH in this tune riff wise, which works in my books anyway. Other than that, FUELED BY FIRE’s main emphasis is on those more brutal and heavier sounding riffs (listen to ‘Defaced Mortality’) through the entire album – the kind of crispy riffs that SLAYER used on their "Divine Intervention" album in particular. The tempo of their songs is mostly fast for the most part of the record, which I personally like a lot, providing a very energetic and vibrant feel over the album. It also needs to be mentioned that guitarist Chris Monroy is also quite a wizard with his 6-stringer. His leads are everywhere on the album, and they all seem to be exceptionally tastefully done. Vocalist and guitarist Rick Rangel also sounds better than ever, bringing Rodney Dunsmore from DEVASTATION (R.I.P.) to mind from time to time. In fact, there really isn’t much on "Trapped In Perdition" one could find something to complain about, I mean, if old school Thrash Metal is something that always sets your trousers on fire. Now speaking of that, I guess I am in the need of new trousers… More about FUELED BY FIRE can be found at: www.facebook.com/fueledbyfireofficial, label: www.noiseart.cc

FUELED BY FIRE - Plunging Into Darkness - by Luxi Lahtinen