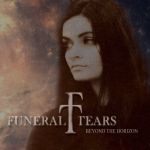 Popular belief says that one man bands are usually a phenomenon of Black Metal. FUNERAL TEARS from Tomsk in Russia prove that mystic wrong. With Nikolay Seredov as the only member for a whole decade, it’s hard to deny that we have a one man band here. But Black Metal is definitely not what FUNERAL TEARS has to offer. Instead, we get a huge dose of Doom Metal here, so slow that the term Funeral Doom is either fitting here. And if a look at the cover reminds you of Gothic Metal, you aren’t on a completely wrong track either. Those of you who still haven’t switched over to the next review will be pleased to read that FUNERAL TEARS are pretty good in what they are doing. From the first notes of the opening ‘Close My Eyes’, slow motion reigns, uptempo or even speed parts are not allowed on “Beyond The Horizon”. The guitars are crunchy and settled in such low frequencies that a bass guitar might not have been necessary. To keep a certain tense, Nikolay spiced the six extremely long tunes (eight to ten minutes!) with some ambient interludes, Gothic styled breaks and even some hints on Blackgaze (‘I Suffocate’). This mix works out, especially in a relaxed mood like the one I’m in now on a Sunday morning, since it doesn’t sound depressive or suicidal, but focusses more on moods like sadness or emotional emptiness. Thus, I always sense a little hope in these tunes. With “Beyond The Horizon”, his third album under the moniker FUNERAL TEARS, Nikolay places a promising band on the map. More information at: www.facebook.com/pages/funeral-tears-band/222108137826362, label contacts: www.satanath.com or www.cimmerianshaderecordings.com