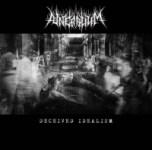 "Ultra Sick Doom" was the title of French Doomsters FUNERALIUM’s 2004 debut demo – and nobody can really deny the fact how ultra sick Doom Metal shit this French quintet actually does on their 2nd album, "Deceived Idealism". Yep, call this Funeral Doom Metal or whatever but this 2-CD set offers the band’s Funeral Doom Metal indeed in a more interesting and more listenable form than many other bands from this paricular genre in question, are able to offer on their own releases. FUNERALIUM, even if being put strictly under the Funeral Doom Metal genre, are neither any THERGOTHON nor any SKEPTICISM either as far as their ‘ultra sick Doom Metal’ is concerned. In my sincere opinion, FUNERALIUM are way more interesting and enjoyable sounding than any of these so-called forefathers of Funeral Doom Metal that sound pretty great but not THAT great, however. I mean, this French act FUNERALIUM pretty much proves that things can also be done in an interesting way – especially when you try to express yourself in one of the hardest sub-genres of Heavy Metal, which definitely is Funeral Doom Metal. There’s much more going on within FUNERALIUM’s songs than on the records of your average Doom Metal acts that mostly tend to sound unfortunate tedious, repetitive – and what’s even worst of all, easily forgettable and just boring even. Boredom is certain, keeping it interesting is not: at least you cannot ever take it for granted that you could be able to do something exciting and entertaining music-wise, especially when you choose to perform your artistic ideas and visions within this tough genre known as Funeral Doom Metal. For FUNERALIUM’s sheer advantage, there’s quite a lot of certain, well sitting dynamics and different layers in their songs what they do, placed on the top of each other – and this stuff never throws you into that unwanted, little corner when things start to get a little bit boring for you. Not even the album’s most lengthy track, ‘Deceived Idealism’, manages to bore me, due to offering just a little bit more than the most obvious yet tedious elements of Funeral Doom Metal. And I don’t wanna say more. Check "Deceived Idealism" out yourself – and by all means, thank me later for doing so. Okay? FUNERALIUM: www.myspace.com/funeralium, label: www.weirdtruth.jp