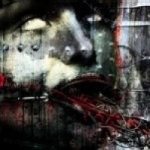 After the untimely departure of NASUM due to the tragic circumstances we all know GADGET became sort of standard-bearers for the Swedish Grind-scene, at least in my book. And with this their second effort they rise up to the task in an absolutely stunning manner. Their first full-length – in Grindcore terms that is – “Remote” consisted more or less of two sorts of songs: typical blast-eruptions at insane speed levels and some heavily nauseating slow-mo tracks of a beautifully depressing nature, which marked the highlights of the record to many. With “The Funeral March”, GADGET kind off melted these paralysing melodies into their blistering one-minute-and-a-half blast-o-ramas, thus creating more memorable and recognizable songs. Blame it on the past of lead-guitarist Blackmon in the melodic Death Metal-outfit WITHERED BEAUTY but this approach really makes GADGET seem as a breath of fresh air to an otherwise rather stagnant genre. Make no mistake, we’re not talking “sell-out” here, this is still sheer blasting-madness at its best, only with a little twist towards the sinister (call it Black Grind). The production simply kills and the artwork reflects the real-life-hell lyrics perfectly. Strongly recommended! www.gadgetgrindcore.com.