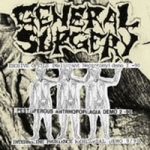 This is really a cool idea – a double 7" EP featuring all pre – "Necrology" GENERAL SURGERY recordings! In particular you’ll get the band’s "Erosive Offals" debut demo, the way better "Pestiferous Anthropopha" follow-up and the (surprisingly good sounding) "Internecine Prurience" 6 track rehearsal (all of them from 1990). In case you were still too young when those recordings originally got released or simply missed out on the band (which is kinda hard to believe, considering the fact that it was a much talked about "all-star" project in the beginning), let me tell you that they musically tried really hard to copy early CARCASS in every aspect (music, lyrics, artwork etc.) and therefore should appeal to any worshipper of the early period of UK’s # 1 pathological grinders. This double 7" finally does justice to the Swedes musical past, because the cool looking gatefold sleeve features a lot of flyers, info and stuff, while both platters of splatter were pressed on bloody red (don’t know if there’s any other colors available as well, or if it’s a limited edition or anything…). Nice one! If you can’t find it at your local dealer or preferred mailorder, it also sells for 7,-€ / US$ dirtectly from Buio Omega, Viale della Cittadella 73, 41100 Modena (MO), Italy, website: www.nuclearabominations.com, email: michele@buio-omega.it