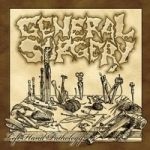 Wow, is it really fifteen years already since the cool "Necrology" demo / EP reared its ugly head? Unbelievable! I still remember very well that I played the (enhanced) CD version of it pretty often at the time (released via Relapse in 1993) and always thought that these guys were kinda close to make it big. But instead of following up the success of a lot of their countrymen, they all of a sudden split-up! In the following years they did resurface here and there again with different line-up incarnations, contributed a song to the CARCASS tribute and put out a bunch of split releases, but never really gained the same recognition again. That is most certainly about to change now, cause GENERAL SURGERY is back with full force and finally delivered their way overdue first full length album (18 years after the band’s origin!!). But unlike many other bands that have been around for such a fuckin’ long time the Swedes don’t suffer from lack of inspiration. It’s actually more the other way around! GENERAL SURGERY have probably never ever sounded better than in 2006! In approximately half an hour they deliver fourteen impressive tracks of the best CARCASS worship you may get, mixed with several elements of classic Swedish old school Death! Blessed with a crushing production "Left Hand Pathology" (cool title by the way!) could easily be labelled the "Symphonies Of Sickness" of the new millennium! Of course GENERAL SURGERY heavily lack originality, but their enthusiasm and still totally refreshing sounding material easily makes up for it! So, doctor Stöver’s advice for any fan of the aformentioned styles is: don’t hesitate for a second and buy this bloody little piece immediately! It may be the cure for your addiction! For any further info head to www.generalsurgery.nu, www.listenable.net.