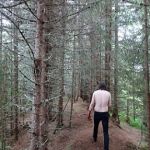 Travel back to the mid 90s when Black Metal from Norway was the thing in most media. Death Metal has lost its momentum and Black Metal appears to be the most dangerous form of music. The tales of murder, church burnings and hatred. It was a time for the first IMMORTAL, EMPEROR or DARKTHRONE (now Black Metalized) works. Grim sounding records, with lo-fi quality productions, yet having that BATHORY sound with a more sinister approach. Well, this Norwegian band (formed back in 2015) recalls those times. More probably the time those bands were releasing their second albums, with better production values and musical execution. That is what I find here, a very well played, grim Black Metal, but also with very good production values. I never understood why so many bands back then wanted such a thin guitar sound, when listening here, with a full and powerful guitar sound, a grim aura can also be attained. And the vocals are also some of the best I have heard in a similar style. No need for high screeches to break glasses, here we have voices from a Demon Warrior ready to take your soul. Yes, it is true that while listening to this those who were fans of Black Metal in that 90s era will surely say “Hey, I know that riff!” but I am sure they have never heard it so well played and executed. Even the drumming becomes quite good and although keeping a simple and direct approach, it works very well here. The cover art is probably the only thing that is a bit different to expect from this musical offering, as it might be mistaken for Folk Metal or something. Still, this is some of the best tribute ever done to that Norwegian Black Metal style, that I have heard for many, many years. Fans will surely worship this. www.facebook.com/gjendød-1099509976778327, www.hellthrasher.com