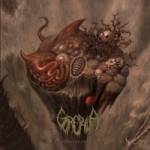 Pennsylvanian goatworhippers INCANTATION make love with LA’s ancient and dark sounding Death Metallers SADISTIC INTENT – and then getting raped ruthlessly by NY’s IMMOLATION – and as a result of this, an infamous bastard child called GOREPHILIA is born. Yep, that’s what came to my mind first. The Finns in GOREPHILIA have finally got their 8-track debut full-length studio album recorded – and even by an international standard this is a monstrously good release what comes to certain qualities of Death Metal in general. "Embodiment Of Death" reeks strongly of those quality factors of Death Metal; actually so much that I am pretty amazed by the fact we are still talking about these Finns’ debut album. Yes, GOREPHILIA have already released two well-received EPs on their own prior to this but I would still say that strictly speaking as solely for a debut album of any Death Metal band, "Embodiment Of Death" is almost jealously good – or even great, without exaggerating one damn bit! What I found so great about this record, you could hardly tell GOREPHILIA’s roots could be far up in the north, Finland. I mean, I have nothing against this sort of ‘known Finnish vibe’ when it comes to Death Metal but sometimes it feels great when you are unable to track down the very roots for some bands, if you just know what I mean by this. Anyway, I am sure without having any background information available about GOREPHILIA, people might associate them – even somehow easily, with some American Death Metal band – and whatnot, comparing them exactly the ones I listed previously, plus some other US Death Metal combos possibly too. "Embodiment Of Death" is true, testosterone-oozing Death Metal performed in its finest form; it’s got enough speed, heaviness, darkness, blasphemy, blood and guts, etc. involved with this furious and punishing Death Metal slab – and a great, amputated leg-heavy but clear production wraps up the remaining quality sectors in this amazingly tight Death Metal package for GOREPHILIA. Here’s a serious contender to belong to my personal ‘Top 5 Death Metal Albums’ category in 2012 – no kiddin’ folks! GOREPHILIA can be contacted at: www.gorephilia.com, label: www.darkdescentrecords.com