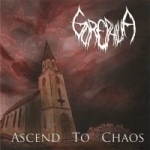 Unbelievably, nearly a year’s time has elapsed since the release of "In Death", GOREPHILIA’s second demo, and the one which I think it’s safe to say solidified them as a talented addition to Finland’s growing roster of young, and good, Death Metal bands. Taking their cues from such bands as INCANTATION, and the many Finns who paved the way before, a gloomy, mid-paced Death Metal EP steadily unfurls its black wings and takes flight-ascending, as it were, to chaos. A strong introductory track kicks off the EP, followed by ‘Death, Chaos, Doom’. Meaty guitar riffs chop over a steady double drum beat, projecting a kind of cavernous atmosphere so characteristic of Death Metal, yet unceasingly welcome to hear. Some things never get old. A slightly faster change of pace greets us upon ‘Reaching The Divine End’, the third track. But the blasting doesn’t start until the fourth song, ‘Give In To Madness’, which also happens to contain the finest guitar solo GOREPHILIA has written to date (so clear and discordant – it’s a beauty!). This EP shows remarkable growth for such a young bunch. Fantastic! For all further info go to www.myspace.com/gorephilia, www.gorephilia.com, www.darkdescentrecords.com