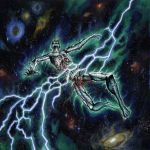 Five years have passed since the release of GOREPHILIA’s debut album "Embodiment Of Death”, one of the highlights of that year, but time has not passed in vain. After this long hiatus, the band beat our heads against the wall again with a real magnificent sophomore album, fulfilled of sheer brutality. What really impressed me the first time I listened to this amazing record was its own personality, because it’s old flavored Death Metal, in the (old) American tradition, but it does not sound like a copycat, nor a tribute / revival outfit. But please don’t misunderstanding me, I really love that retro sound, but when your ears are hit by this kind of brutal fresh sound, you must highlight it!!! Well, these Finns have delivered ten unrelenting tracks of pure Death Metal devotion, as I said previously, in the good old American way with clear MORBID ANGEL influences, some touches of AUTOPSY, IMMOLATION, BAPHOMET etc. Everything well managed, just as influences, GOREPHILIA’s brand is present on each track. I’m not saying they invented the wheel, but they have matured their sound, taking their influences and mixing them for a final personal sound. Sometimes the whole record reminds me of MORBID ANGEL’s “Gateway To Annihilation”, because the sound isn’t based on blast beats, contrarily, mid paced to slowed down riffs are predominant, guitar solos are highly inspired on Trey Azagthoth’s style even Nemesis’ vocals have a reminiscence of Steve Tucker’s vociferations. But, again, they’re not a copy band, all the musicians are highly skilled, and show it through the whole disc. The production is another highlight. A powerful thunderous sound! The details have not left aside, typical for Dark Descent releases, in a few words, high quality!! Personal favorites, ‘Return To Dark Space’ (when I listen to this track I have tormented images of the front cover in my mind), ‘Black Horns’ and ‘Untitled’… In summary, an excellent album! Definitely not a typical Finnish Death Mtal album and a serious pretender of the best albums of 2017. www.facebook.com/pages/gorephilia/137358132944855, www.darkdescentrecords.com