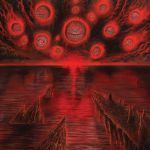 GOREPHILIA
In The Eye Of Nothing
(Dark Descent Records)
42:55min

But life goes on… To be honest, I wasn’t expecting such a release from GOREPHILIA so soon after the departure from this world of their founding vocalist Nemesis. But against any expectation, the guitarist took the duty of vociferating for “In The Eye Of Nothing”, their third album which spawns after their acclaimed 2017 album “Severed Monolith” and a split with their fellow countrymen UNDERGANG in 2018. This time there are 9 cuts filled with the yet known GOREPHILIA style, which takes a deep sniff of American Death Metal à la IMMOLATION, INCANTATION, MORBID ANGEL (old) and then sinks its head in on the yet known Finnish Death Metal darkness and unhinged abyssal sound, resulting on an abomination which extends its vessels between those two worlds. Talking about in general, the mid tempos and slow motions are predominant here, which is a huge difference on “Severed Monolith” where brutality was the most remarkable aspect. Instead of an outburst of rage, the same members dared to descend below their foundations delivering an unexplored sepulchral vibe, turning out to be such an interesting contrast on their career, but staying still the same despite their aforementioned loss on the vocalization. There are some gloomy paced moments after the storm, but dangerous at the same time by the hand of ‘Consensus’ and ‘Death Dream’, a couple of instrumental ambient tracks that could chill your spine if you are on the mood. Some of the most obscure tracks go along by the hand of ‘Simplicity Of Decay’ and ‘Ark Of The Undecipherable’, with oppressive and crushing slow passages where the distant eerie strings and the precise drum fills evokes a grievous scenario after a barrage of blast beat pounding. About the soloing, it’s the only point that seems to be a little bit disconnected from the rest of the tracks because its mixing within their world, but nothing to condemn severely at all. On the graphics, the red and threatening cover art will drag your eyes onto other closed eyes with an exception of one that is already open (I think there’s way beyond that detail), watching and waiting… Given the description, context and reasons, there’s nothing left to encourage you to delve on the darker side of GOREPHILIA if you dare. www.facebook.com/gorephilia, www.darkdescentrecords.com