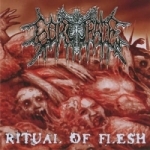 GORETRADE
Ritual Of Flesh
(From Beyond Productions / Displeased Records)
35:06min

After two split CD’s (one with CORPSE FUCKING ART and another with CARNAL) GORETRADE finally unleash their first full-length Death / Grind massacre, which unfortunately is not more than just another mediocre release in this genre. Due to the horrible drum sound (reminds me of the new METALLICA and the last CARNAL album) a lot of brutality is lost and the blast beats start to suck big time after a while. As a positive element one has to name the slight references to the good old NY-style Death Metal (e.g. SUFFOCATION, early INTERNAL BLEEDING etc).The project of INTERNAL SUFFERING’s Andres Garcia is ok, the vocals are alright, the riffs are pretty good and the band does not continually blast themselves into the nirvana, but adds a couple of very heavy and shredding parts too. If there wasn’t the awful drum sound and a little bit more innovation GORETRADE could have definitely made a stand against the supreme US-hordes, but sadly they fail. People who buy everything that pops up in the field of Death / Grind might like to give the Colombian warriors a chance, but do not expect too much. More infos and maybe even MP3’s at www.goretrade.com, the label can be found via the Displeased Records website: www.displeasedrecords.com.