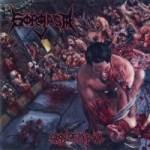 US Death Metal titans GORGASM were cruel to us fans over the last couple of years since after delivering the sheer flawless “Masticate To Dominate” in 2003 and a 2-track promo in 2006 they simply dissolved. Fortunately, with a revamped line-up with vocalist / guitarist Damian “Tom” Leski being the only original member, GORGASM finally grant us the bloodsoaked pleasure of a new album entitled “Orgy Of Murder” on new label home Brutal Bands (also INSIDIOUS DECREPANCY, DESPONDENCY, DEVOURMENT…). And, despite the long time of wait and changed personnel, anno 2011 GORGASM sound as violent and intense as ever uniting technical ferocity and crushing, chugging breakdowns in powerful and comprehensible brutal Death anthems that should immediately satisfy all fans of the genre who favour stuff in the best tradition of SUFFOCATION, DEEDS OF FLESH, DYING FETUS. The gorgeously gory offering is topped off by Leski’s excellent growls and gurgles, guest vocals by Pascal (AMAGORTIS) and Shaun LaCanne (PUTRID PILE) and an impressive production by Chris Djuricic that is not as sterile as your standard brutal Death / tech Death sound with thick as a brick guitars and thundering drums where every blast beat, every cymbal crash butchers as merciless as possible. GORGASM were never sounding dull in the past and contrasted their relentless efforts with a wicked sense for minimal melodies especially during the fast passages. Probably, this is their secret gift making them stick out of a mass of likewise brutal bands since hardly anyone else spices its furious blasting death metal assault with such delicate technique without ruining the impact, structure and quality of the songs. Actually, many bands in the genre can’t even properly write songs! Maybe “Masticate To Dominate” was a little bit more complex than “Orgy…” but songs like ‘Infection Induced Erection’, ‘Cum Inside The Carcass’, the devastating opener ‘Bloodlust’ or the closing beast ‘Silence Follows Dismemberment’ are perfect examples on how brutal American Death Metal should sound like. The album’s length is rather short with 29 minutes and the misogynist lyrics might not meet everybody’s taste, but if you love to hear a barrage of stunning riffs, impressive rhythm changes and violence deluxe until the blood shoots up your cock, then GORGASM have once again delivered the goods! www.brutalbands.com; www.myspace.com/gorgasm2