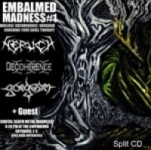 This three-way CD-R sampler was most probably made for a concert of three bands featured here – and it must have been a great show according to the material featured. The first are NERLICH from Finland with the tracks of their “Insane Creations – Inorganic Echoes” demo. ‘Degeneration Process’, the opener, instantly conjured up images of earlier MORBID AMGEL and MONSTROSITY, ‘Lord Of All Fevers And Plagues’ and the second album respectively. Crowned by an evil breathy midrange vocal delivery, NERLICH controlledly build their riffing around well thought structures with intelligent breaks and tempo changes.The soloing blends in great, adding up to the morbid picture. With running playtime the material shows a stronger Thrash influence (PESTILENCE comes to mind), somehow I have the impression as if the last three songs might be older tracks. Some moments remind me of DEATH, the slower harmony parts especially, traces of OBITUARY are also present. These Finns were previously unknown to me and I am more than glad to review this as some great dark and twisted Death Metal with a powerful thrashing edge is offered here – keyword old school! According to their website NERLICH have already recorded an album (with an altered line up) and are now looking for a label to release. Go to their website www.nerlich.tk to learn more. Round two: DECOHERENCE! Now this band hailing from France takes a more contemporary approach. Doublebass ridden brutal Death Metal with rhythmic heavy parts getting chased by blast passages and a good dose of breaks. The vocals range from deep growls and a few guttural notes to aggressive shouts, not unlike some brutal Thrash shouter… and also the groove and a good part of the riffing has a feeling of, lets say, earlier MALEVOLENT CREATION to it. The overall mixture is a good deal more technical at parts, though. Personally, I find this material absolutely convincing and its too bad there are only three tracks here! www.decoherence-music.com. The French GORGASM (now renamed to GOROD) are the third and last band on this sampler. Old school Death Metal of a technical kind with a fair deal of melodic fretwork of both guitars and bass is the game here. As well as NERLICH, GORGASM take inspiraton from the early nineties yet focus on the technical aspects; older NOCTURNUS (without keyboards!) and CORONER may serve as vague orientation for the riffing. The musicianship is absolutely without fail here and some scale runs even are comparable to some NECROPHAGIST stuff. My only point of criticism applies for the vocals: the attempts at inhaling, pig squeals and guttural frognoise vocals sound inconvincing to my ears but as these tracks are already from 2002 this may have been improved by now. I am interested to see how their debut album which will be re-released by Willowtip Records turns out. http://gorgasm.free.fr/. So, EMBALMED MADNESS #1 offers the demos of three bands covering different grounds in Death Metal – and they do it bloody well! I would say this release is a great piece of music for every worshipper of underground Death Metal, so get it! To me, the sound quality is more than decent for demo recordings and the material speaks for itself convincingly (is it just me or are people bitching about “bad sound” much more today for no apparent reasons? Anyway…). Be sure to check out the homepage of Nihilistic Holocaust as well! http://site.voila.fr/NIHILISTIC/