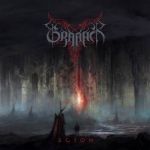 GRABAK, the musical arsonists from Leipzig, Germany joined the ranks of the Norwegian (Scandinavian) pioneers in the late nineties. Their first work saw the light of day in 1999 and whoever listened to their discography, can say they belonged to the early birds. They always sound authentic and time has told that their hearts have always been dipped with darkness, and obviously antiauthoritarian. And records like “Der Prophet Des Chaos”, “Encyclopaedia Infernalis”, “The Serpent Within Paradise”, “Agash Daeva”, “Sin” and “Bloodline Divine” quickly affirm their vision and path over the decades. So, with almost 25 years of band history, one can rightly speak of GRABAK as a veteran. In the more than two decades the band had its ups and downs, developed its style and swapped band members. However, all that they do does not lack integrity or persistence, as their seventh studio album “Scion” is here, which now was released in co-operation with Talheim Records. Once again, the Leipzigers greet the listener with a leisurely, atmospheric intro, before all hell breaks loose. And throughout the nine tracks and 45 minutes of playing time that atmosphere and arrangement persists. In the song ‘Epitomes Of Cruelty’ GRABAK musically unearthed the hatchet and ‘Furia II – Weltenbrand’ showed similar command with hearty presence of ominous melodies and menacing harmonies. Also, an unbelievable work on the drums and strong guitar parts lead through the tracklist, expressed more clinically with a suitable production. Deep into the record, ‘The Siren’s Song’, ‘Heirs Of The Serpents’, ‘MAID – My Art Is Death’ and ‘Black Water’ continue to ripple on the disc and provoke for many more returns. The very atmospheric album cover shall further provoke anyways. On the whole, with “Scion” GRABAK again showed their craft and have delivered their seventh album in the conventional style, which is worth listening to, especially if you haven’t heard much from GRABAK. Explore more about the band and label here: www.facebook.com/grabak, www.facebook.com/talheimrecords.