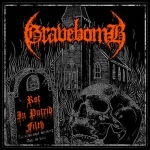 Once upon a time… there were four young guys from Gothenburg. Their names were Sven, Petter, Leon and Patrik. Walking around aimlessly in the streets of their home town, they discussed on what do with their lives and how to find their place in history. Absorbed in their debate, the four friends did not recognize the old man with the long and shaggy grey hairs, dressed in a worn army coat. They were startled when the old man addressed them: “I was looking for you guys!”, he said with a raucous, yet fascinating tone. Petter was the first to settle a little and replied: “You… were looking for us?”. “Yes, exactly you! I watched you from afar and listened to your debate. I can help you!” “You can help us?”, said Sven doubtfully. “How do you know we need help?” “As I said, I listened to your debate. You are looking for a goal in your life, a way to eternalise your names, aren’t you?” The four guys nodded full of surprise and respect. “And I have the solution you are looking for!” The four guys looked at each other in sheer disbelief. As frightening as the old man was at first sight, as convincing his firm words sounded to the friends. It was Leon who took over now and asked, still a little shaking: “What do we have to do?”. Without a word, the old man beckoned the four friends to follow him. They went after him to an old, forsaken place that turned out to be an abandoned warehouse. At the door, the old man took the key that he had on a chain around his neck and put it into the lock. He turned the key and the door swung open. After they entered slowly, the friends watched the scenery that unfolded. The place looked like it travelled through time and space. An old drum kit dominated the room like an oaken throne. At both sides, amplifications and speakers piled up. Leaning at the speakers, they found three electric guitars, two of them with six strings while the third had only four, but heavier strings. The walls were covered with posters and flyers of concerts that happened a quarter of a century ago. It was a little hard to decipher the names of the artist who played those ancient shows, but soon names like NIHILIST, CARNAGE, MACABRE END, EXCRUCIATE, ENTOMBED, GRAVE, UNLEASHED or DISMEMBER revealed. On the ground of the room, there were strange devices like boxes with pedals wired to both the guitars and the amplifications. Some of them had letters imprinted that read “Boss HM-2”. The four guys looked at each other in confusion for a while until Patrik asked with a little feeble voice: “What do you expect us to do?”. The old man rose his voice now and said with thundering words: “This is the heritage of the generation of your fathers! Revitalize this legacy! Give it back its old glory! Make it bigger than it ever was and plant it into the heart of every person on this planet, young or old!”. He took a bunch of tapes out of his coat, threw them on the old stereo that was in one corner of the room and pouted out: “Listen! Practice your skills! And compose the sound that should conquer the world again! This is your unholy mission!” With these words, he disappeared in a cloud of dust. It was Petter who did the first move and put one of the tapes into the cassette player of the stereo. As soon as the first sound came from the speakers, the life of the four friends never was the same again! They practised like maniacs and played songs with all of their enthusiasm. Within not even a year, the four had composed no less than ten songs and went to a studio to record them. Meanwhile, the old man watched them from afar with great pleasure, happy with the result of his appearance. Every once in a while, he had to smile about the name the guys chose for their mission. “GRAVEBOMB – this still sounds a little bit silly to me. But, hey! It’s just a name…”. But the four friends were happy with the name and decided it was time to refine their recordings they called “Rot In Putrid Filth”. So they decided to enter a well known place in the great capital Stockholm. They knocked on a door that said “Sunlight Studios” and as soon as the door opened, their eyes widened like never before. They didn’t expect to meet the old man again… Well, thus our story endeth for today, but not for all eternity. If you can’t wait to find out what happens next, keep yourself updated at: www.facebook.com/gravebombband. And if you’re intersted to find out if “Rot In Putrid Filth” really sounds like the story tells you, visit: www.rawskullrecordz.org