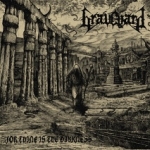 GRAVEYARD
...For Thine Is The Darkness
(War Anthem Records)
43:36min

The time has finally arrived for a new slab of material from Barcelona’s Death Metal machine GRAVEYARD! The band’s last album of new material was 2013’s "The Sea Grave" and 2015’s "The Coffin Year’s" tied us over with some good covers and rarities just to keep our appetite satisfied. Usually during this long of a span between albums bands tend to change line-ups or attempt to change their formula for songwriting just to keep things fresh, but not here as this band likes to stick to what works. Enter "…For Thine Is The Darkness", from the start you can tell this is classic GRAVEYARD from the eerie intro song to the classic old school Death Metal sound that has been their bread and butter. The first thing you will notice is the production is a bit thinner here than it was on "The Sea Grave", but that is not entirely a bad thing as it remains in the same vein. The tempo for each song varies but one thing you get for sure are some interesting guitar hooks. The guitar solos on here are just fantastic and don’t drown out the song or are placed in odd places. The intro and outro songs have an Arabic title that I’m not sure what it means, but they provide the atmosphere for what is to come / came before and a nice addition. ‘With Fear And Thirst’ gets things going on this album with a fast paced and catchy riffs. This song happens to be one of my favorites on this album because at about the half way point of the song things slow down and keyboards are introduced to add a certain eeriness, but that only lasts for a few brief moments as things pick right back up. The other songs that caught my attention were ‘The Mighty Columns Of Irem’ and ‘The Womb Of The Desert’, but again this is a very solid album that really doesn’t have any disappointing songs. All in all you get 17 tracks (9 of which are instrumentals / samples ranging from a few seconds to 1:50 minutes) of Death Metal of olden times. Much like BOLT THROWER or IMMOLATION you know what you are in for when you pick up an album from GRAVEYARD and it is never a disappointment. "…For Thine Is The Darkness" is no exception and you get a solid album with some interesting / memorable songs (one of which is ‘Son Of The Aeon / Sun Of The Daemon’). For more info: www.graveyardofdoom.com, www.facebook.com/deathmetalgraveyard, www.war-anthem.de