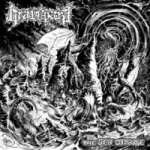 Four years after their promising debut album effort “One With The Dead” Barcelona’s GRAVEYARD return with their 2nd longplayer. Boys & girls this is another example that authentic and most of all dedicated underground Death Metal doesn’t need to have Scandinavian, Dutch, British or American origins. Caramba! Spain strikes back. With the same ambitions like their 2011 MCD the band produced the complete album at their guitarist’s Moontower studios. Expect a bloody raw and organic production, nothing polished!!! To me “The Sea Grave” sounds more tight executed in the studio than their previous releases; especially the drums, but you need a certain kind of settling in period to get used to the sound. I wonder how this one might have sounded with a fat Swanö mastering, like they had on their debut!?! Generally this album is a grower and I think that GRAVEYARD do best when they turn into the midtempo or even the doom styled parts of their Death Metal offerings. There are some utterly dark and mighty moments in this punch of Death Metal, although I miss a little bit the straight away catchy moments of older tracks like the brilliant headbanger ‘An Epitaph Written In Blood’. This new material is more tricky in its structures and the guitarwork has grown as well, although it keeps the GRAVEYARD spirit. Most of all the band has created a sort of own charisma in style, being a lot more than a cloneband of their 90s Death Metal idols. You hear their roots, but you hear their own way of evolvement as well. The coverartwork has been done again by Chicago’s sicko Matthew “Putrid” Carr in the classical black / white manner. A vinyl release is also set for this album, so in the end this another true and from the heart underground release for the dedicated legions of classical Death Metal worshippers!!! www.facebook.com/deathmetalgraveyard, www.graveyardofdoom.com, www.war-anthem.de