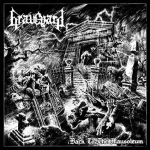 GRAVEYARD
Back To The Mausoleum
(War Anthem Records)
20:10min

Death Metal is nearing its 40 years and instead of evolving into new forms, in the last decade it has turned back to its primitive roots. Maybe this revival might have seemed like a refreshing change at first, because of an underground scene saturated by over-produced brutal and slamming Death Metal, but nowadays it’s getting pretty boring. What a cruel twist of fate: the new wave of old school Death Metal was born as an act of rebellion against trendy and modern influences, but now has become itself a trend. Reunions, massive catalogue reissues, new bands trying to replicate the old sound and spirit: these are the current guidelines. But, using a Boss HM-2 pedal is not enough to record the new "Left Hand Path", not even copying John Mc Entee, Eric Cutler and Danny Corrales’ obscure guitar styles can give you the right to elect your band as the new heir to the thrones of AUTOPSY or INCATATION. Neverthless in a scene with tons of mere clones of the legendary names from the 80s, acts unable to create their own sound, we can still find some interesting bands and GRAVEYARD from Spain is one of them. Active since 2007, the year in which they recorded their first effort entitled "Into The Mausoleum", the Catalan quintet, after one EP, ten splits, one compilation and three full length albums, is back in 2018 with a new EP released under the German label War Anthem Records. The title is "Back To The Mausoleum" and represents a sort of continuation of their first demo. The cover artwork is once again painted by Matt "Putrid" Carr, a pretty known freelance illustrator in the underground, responsible for a couple of IMPETIGO artworks too. This new EP includes five songs of typical old school Death Metal for 20 minutes. The ingredients are simples: heavily distorted guitars in the purest Sunlight Studios tradition, cavernous vocals à la Craig Pillard and an average Death Metal drumming. The riffing is pretty reminiscent of ASPHYX and early Swedish Death Metal bands, all well balanced with some killer leads. There are many slow parts, but unfortunately they’re not as cryptic and claustrophobic as those from INCANTATION or DISMA; indeed, GRAVEYARD prefer a melodic form of Death / Doom. The rest of the songs structure is an alternation of energetic classic Death Metal tempos – "Scream Bloody Gore" by DEATH comes to mind – and few fast accelerations. Here we get a weak point: the fastest parts are not as good as you would expect, mostly because we’ve listened to this kind of riffs too many times and, even worse, the single foot blast beats are played pretty badly. However, "Back To The Mausoleum" is an enjoyable old school Death Metal EP, that to me would have been better with less melody and more brutality, but this is GRAVEYARD’s personality and they’re definetely worth a listen. More info at: www.facebook.com/deathmetalgraveyard, www.war-anthem.de