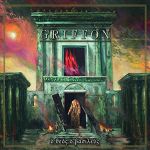 There’s something about spoken word in French Black Metal that just doesn’t sound intimidating or evil. And though the band could probably easily kick my ass, I’d be laughing at their words beforehand. Having said that, GRIFFON’s second full-length “ὸ θεός ὸ βασιλεύς” is a fairly decent and refreshing album. The first track ‘Damaskos’ transforms between melodic, acoustic guitars to atmospheric, Black Metal riffs and scowling vocals. ‘L’Ost Capetien’ erupts with a rapid charge of energy, simmers into somber sounds, then creeps out of the fiery pit with abundant anger. The third song ‘Regicide’ has a majestic feel to it, as it should. This is what you’d play before killing your king. Unfortunately, there’s more of that damn spoken word in French that I can assure you utterly destroys the momentum. Thankfully, ‘Les Plaies Du Trone’ is more satisfying with its steady guitars and Black Metal vocals that reel it all back in from its prior stutter-step. The pianos in ‘Abomination’ segue into an off-kilter riff and faint keyboards shimmering in the background. ‘My Soul Is Among The Lions’ sort of chugs and radiates in a track that’s fine in itself but never really moves along. ‘Et Praetera Nihil’ could easily be the soundtrack to a hippie commune artsy film. And finally, ‘Apotheosis’ wraps it up in a track that plods along in a slow tempo delivery that seems to fizzle, much like the whole album. If you remove the spoken word and weird little segues throughout, the album would be much more solid and enjoyable. The band proves they’re a talented bunch, and the vocals rip and roar like a lion towards its prey. Their second album is, for the most part, a nice accomplishment. GRIFFON at least shows promise in a genre where not every band is able to do so. For more info, check out www.facebook.com/griffonblackmetal, www.lesacteursdelombre.net