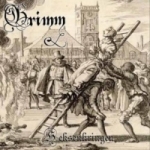 A worn-out band-name (already worn-out when they had chosen it in 1996 whilst founding that band), singing in native language (here: Dutch) and galloping on medieval battle-fields is nothing new and innovative. But these words don’t count at all for all of us traditionalist Metal maniacs. The music often reminds me of ISENGARD, at least due to the singing of the vocalist. Of course, all the other Scandinavian bands come to mind and GRIMM really come close both in sound-production and composition structures. Unfortunately this “Folk” thing sounds most of the time too happy in my ears. First song really reminds of the “Eld” stuff of ENSLAVED (even the vocals). But then almost the whole recording gets too nice. Lovers of that Folk-phenomenon probably will appreciate that music that also features a lot of hints to Rock’n’Roll music. I myself like the parts with the nasty and evil screaming lot more. The clear vocals are too loud, used too often and don’t contribute to a weird atmosphere that I appreciate so much. Sometimes less is more. In the end, this is better stuff than most of the stuff coming out from that genre. I just would like to have it a bit more evil, nasty with that important a huge impact on me that music should have. But to repeat myself: this is absolutely not bad and I think the songs in a rough demo-version would do it for me for 100%. www.displeasedrecords.com