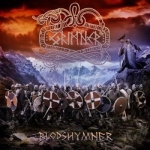 Anyone out there still into Pagan Folk and Viking Metal? Then you might check out this one from the heart of Swedish nowhere. GRIMNER arose from the ashes of the widely unknown band MORTUM HATRED in 2008 and added traditional instruments like bagpipes, mandola (a kind of mandolin) and flute to grow into a six-piece. Up to now, they released an EP (“A Cry For Battle”, 2010) and a self-released full-length (“Färd”, 2012). Now GRIMNER are here with their first full length for a proper label. And this album “Blodshymner” tells tales from the days of yore, musically and lyrically. GRIMNER’s approach to Pagan and Folk music is not as metallic as some other genre bands, yet they have their own special atmosphere that genre lovers should dig for sure. I’m not a downright expert for Viking and Pagan Metal with a lot of Folk influences, since most of the bands of these musical directions passed me by without any impact. But “Blodshymner” is one of the best examples of the genre. The furious opener ‘Blotet’ is a somehow happy-go-lucky overture for a variable collection of melodies and anthems, culminating in two very fine tracks in the middle of the album. ‘Forna Dagar’ is a quite epic tune with a medieval atmosphere, most parts of this song would fit as movie score for a nice, pretty bloody Viking saga. And my personal fave is ‘Mot Jotunheim’, for the utterly fine inclusion of folk melodies into a pretty rock-orientated song. But the other songs are nice ones as well, mainly without too much of the “party aspect” that I mind in most Pagan Metal. The only song that completely walks this path is the final ‘Hinn Heiðinn Siðr’, but that’s okay with me. Check out GRIMNER at www.facebook.com/grimnerswe or the label at www.stygiancrypt.com