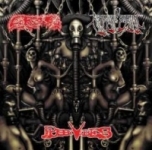 Welcome to grinding madness!! Australian label Grindhead Records established their name in the underground with some excellent Goregrind / Death Metal releases and this 3 way split between Portuguese Grinders GROG, PUSSYVIBES and sick Aussie motherfuckers ROADSIDE BURIAL drove the quality bar even deeper into the guts of perversity. GROG starts the party off with a short intro and 5 tracks of fast, pummeling Grind in the vein of old NAPALM DEATH, ROT and EMBALMING THEATRE updated with a much fatter sound and sleazy attitude which you can guess from songtitles like ‘Fellowship Of The Shaved Balls’ or ‘Ass Sapiens’, rounding up their part of the split with a killer cover of NUCLEAR ASSAULT’s ‘New Song’. Next are Aussies ROADSIDE BURIAL who kick shit off with the splattering ‘Shack Of Amputation’ and proceed smashing your brains out with another 8 fast but also fat as a huge load of ten ton lard slab of meat sound, bringing back golden years of Sunlight Studio to mind. The tracks last between 1-1,5 minutes, there are a few mid-paced riffs adding some groove to generally short and fast attacks with cool titles like ‘Pick-Axe Coma’, ‘Med Head’ or ‘Binge On Blood’. Killer shit and it never gets boring! The guttural growls are cool as fuck too, very well executed! And finally on the bloody bill of gore are PUSSYVIBES with 6 tracks of groovy Goregrind in the vein of BLOOD DUSTER, CBT and REGURGITATE. Fast, lots of deep growls mixed with crazy shrieks and the Martian theme, just check out the titles: ‘The Martian Invasion’, ‘Whore Goddess Of Mars’, ‘Martian Women In Cell Block 666′, etc. You gotta love the band with space imagination, hehe! Once again, this is intense as it can be, no slowing down for PUSSYVIBES, each track tears your guts out within 2 minutes. So, to sum it up, this is a very impressive 3 way split, short but fuckin’ intense, all bands play catchy as bloody STD goregrind, no long intros, straight to the point mindblowing gorefest! And you can check 3 cool bands which also have other releases out! Highly recommended!! www.grindheadrecords.com