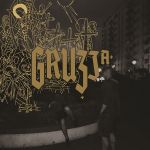 A strange cover for a band which is announced as Black Metal. But GRUZJA are doing a good job and a track like ‘Moja Ratyzbona’, heavily inspired by the GORGOROTH song ‘Carving A Giant’, is pure joy for black souls. Same goes for the other tracks and although GRUZJA are in control when they play faster, the full power is unleashed during the slower and mid-tempo parts where the brutal vocals can develop their impact on the listener. The songwriting is inspired by bands like IMPALED NAZARENE and their more Punk like attitude towards the genre Black Metal, most evident on ‘Jego Glos’ with simple riffing and stamping drums. It reminds me of DARKTHRONE on albums like "F.OA.D." and "Circle The Wagons". The first twenty minutes shows the band in good shape, but during the last two tracks the quality sinks downwards. ‘Ilu Nas Bylo?’ is some strange piece of spoken words combined with some instrumental noise. But ‘Isc Dalej’ took the cake. What the hell? Techno Metal, Industrial Noise or whatever, I tried more than once to listen to this piece of music in one piece, but simply could not stand it. To sum it up: 20 minutes of raw Black Metal with brutal vocals and a song writing more influenced by VENOM than Scandinavian bands of the second wave of Black Metal. The last eight minutes are a complete disaster, so it depends on your own decision to pay the price of a full-length when more than a quarter of the playing time has nothing to do with Black Metal. More information can be found here www.facebook.com/gruzja-konsulat-431469164260647 and here www.godzovwar.com