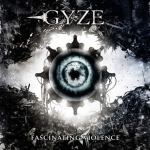 Melodic Death Metal had its peak in the mid 90s when exceptional great releases, especially from the Scandinavian soil, made their victory march to conquer the entire globe. Now almost two decades later the whole genre is a two sided blade. Hated by some of not being filthy and violent enough, loved by the other half for being innovative with refreshing ideas. Personally I like both genres (classic & melodic Metal Of Death) and apart from it there’s only good or bad music and it doesn’t matter which style it is. As long as it is Metal of course! GYZE is a three piece outfit which keeps up the flag of melodic Death Metal. Formed 2009 as SUICIDE HEAVEN in Sapporo / Japan, the band soon gained a loyal fanbase due to their outstanding performances and extremely skillful executed brand of Metal. They decided then to move to Tokyo and changed their monicker into GYZE. One of the highlights of these youngsters from the Far East was without any doubt the participation in the world’s biggest Metal event in 2012, better known as Wacken Open Air. The impressive gig opened the door for this trio to get an international record contract with Coroner Records from Italy and finally to release their debut album I’m listening to right now. It’s entitled "Fascinating Violence" and it has everything a superb Melo Death album needs. It has the neccessary aggression and speed, excellent melodic guitar lines / riffs, killer leads and thrilling fastpaced drumwork. In addition their technically brilliant played arrangements are packed with sophisticated details and surprising elements. Plus some extra parts only a Nippon based squad can deliver. Even the used keyboard passages don’t disturb the overall sound as they aren’t too dominant and just have a kind of highlighting character and enriches the material. Another distinctive sign of the band are the twin vocals by Ryoji and Shogo respectively. Speaking about vocals: some guest chants were done by Claudio Ravinale from Italy’s finest and label mates DISARMONIA MUNDI. To sum it up: the songwriting, performance and production (done in the Metal House Studio, Italy) is top notch. So there’s actually no excuse not to check these Japanese warriors out if you are into that kind of music and your playlist includes stuff like DARK TRANQUILLITY, CHILDREN OF BODOM, DISARMONIA MUNDI, ARCH ENEMY and others. Tunes like ‘Trigger Of The Anger’, the original ‘Regain’, ‘Trash My Enemy’ or the title track wait to be discovered. For more info vist their website at www.gyze.jp or get in touch with the label at www.coronerrecords.net.