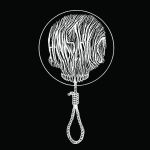 First material by this American band, setting off straight with a full length album and a deadly cover! Pigeonholing them as a Death Metal band could be very deceiving, for they present a broad range of atmospheres along the 4 tracks. However, the sort of slow to mid-paced psychotic despair vibe seems surface over the dragging heaviness and numbness of its riffs. Apart from the third track, all others are particularly long and filled with several guitar layers that sound pretty clear and consistent to me. Said that, there’s no particular riff that really struck me as a highlight of the album. It all revolves around a constant void of emotions, deprived of really pungent passages wasn’t for the few lead guitar melodic incursions that occasionally steal the show as in the breakdown passage of ‘Wrath Weaver’, for instance. As much as I like the tones picked up for a quite modern approach to Death Metal, they remind me of what was being done around late 90s and start of the 2000s, as heavy as it could be without covering everything with reverb and confusion. Personally, I believe HANDS OF THIEVES thrives more on the heaviness of their sound as a whole than on distinctive features in their sound, but that would be too eager an assumption for a first release. This is the sort of sound that may work better live with loud decibels rather than scrutinized at home. But you can check them for yourself at www.facebook.com/hands-of-thieves-1527057844253597 or www.hellthrasher.com.