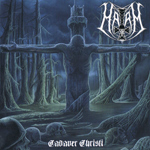 It seems to me that every new and hopeful Death Metal band in Germany gets signed by F.D.A. sooner or later. And there’s just one possible conclusion for that: Rico has a brilliant look or better a brilliant ear for this music. Up to now, I haven’t heard any weak album from F.D.A., not even average. And some bands in his roster are even among the best Death Metal bands to date – just look at SULPHUR AEON, DESERTED FEAR or REVEL IN FLESH. HARM, a new killer of a band from Berlin, fits in this glorious row perfectly. Even though the band-members are quite experienced, having played in some underground bands before, they couldn’t have been there when those who formed Death Metal were active. This means: when the history of Death was taught in class, HARM paid absolute attention. Every second of their debut "Cadaver Christi" screams "fuckin’ old school!" so damn loud that you can’t ignore it. And if I say "old school", I really mean "even older school". "Cadaver Christi" has ten bullets for you. The album starts off with a nice intro from a movie (don’t know which one yet – movie nerds to the front!), unfortunately for most in German. ‘My Name Is Jack’ sets in with a fury like Jack the Ripper haunting his next victim, but the monstrous grooving mid tempo beats do their best (or worst) as well. Finest guitar work with loads of reminiscence to the old heroes is the trademark of ‘Burn The Saints’, another highlight before ‘Cadaver Christi’ proves that it is a worthy title track. Swedish riffing meets damn fast drumming and harmonies that remind of old European Death Metal. But it’s not the last monster of a song on this album, for it is a bloody monster itself. Devoted Death Metal with little homages to those who invented and formed this sound. Be those bands HELLHAMMER (‘Blood For God’), AUTOPSY (‘Harmageddon’) or SLAUGHTER ( ‘Nuclear Holocaust’) – HARM knows whom to pay a sometimes tongue-in-cheek tribute. And I’m pretty sure that Tom Warrior and Martin Ain would have loved ‘Cross Desecration’ when they were younger. I love the song anyway. Despite the fact that HARM sometimes sound like they were just born too late, the songs on "Cadaver Christi" are very original and overwhelming in their freshness, their reckless abandon. Fuck, I love this album from the deepest of my rotten heart. One more candidate for the "album of the year" for sure… This great offering is crowned by another brilliant artwork from the god of art, Mr. Juanjo Castellano, the best artist for extreme Metal nowadays. Tons of reasons to check this band out or buy this album blindly. So, just go to: www.facebook.com/pages/harm/131650603566081, or check out the extremely dedicated label at: www.fda-records.com