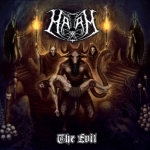 I felt, Berlin was kind of off the radar for quite a while when it came to a nice Metal scene. Apart from grey zone and commerce. Gladly there where a few changes in the Metal scene itself as well as in the scenes surrounding the dusty traditional Metal gangs. You don’t need to be a weekend drunk with a liking for role plays anymore wearing a stupid fun-shirt about how many meat and beer you are about to consume. Metal found its ways into the underground again. Into sweaty cellars and clubs with nearly no stages. Into DIY and real anger. And as well as social and political issue the do-it-yourself and take back the control idea, effects the scene. The movement established itself now next to big record companies, Metal cruises, and plastic mega festivals. Just check the shows in places like Tiefgrund, Köpi, Bei Ruth or Tommyhaus the past years and today. From old school Death to raw Black Metal everything is possible. And something is growing out of that mold. Berlin is being newly formed with bands, labels, records stores, venues, pubs and clubs. One of this very successful and trend setting labels with a Punk / Metal background and an innate urge for good bands is F.D.A. Records. Releasing records from bands like WOUND, DEATH TOLL 80K, SLAUGHTERDAY, FUNERAL WHORE and and and. Thus creating a wide ranged and strong underground with some very descent arguments to get involved in that Eucharistic funeral. Therefore it’s only consistent that Berlin’s own HARM also released their debut record “Cadavar Christi” on F.D.A. Records. Which, as well as the 2011 released demo, left very good impressions throughout the scene. “The Evil” now is released on Final Gate Records, also a small but passionated label. And it feels like with the label change HARM kinda changed their style too. The difference between “Cadavar Christi” and “The Evil” is clearly the step from a DISMEMBER – like Death massacre to a muddy, rotten OBITUARY styled manslaughter (I’d also like to throw in names like HELLHAMMER and AUTOPSY, as well as a cover of PUNGENT STENCH’s ‘Dead Body Love’ here – Frank). “The Evil” is a homage to the simplest idea of Death Metal. HARM don’t waste much time seeking fancy additions to their menu. The recipe on “The Evil” is dirty, angry, doomed Death! Switching between slowly rolling and fast driven Punk drums. Simple riffing with Allen West styled solos and a mangy growling voice making this dish rancid and baneful. Still you have a clear understanding of what vocalist Blitzkrieg Barkley tries to get across. About many different subjects like, the first world war, Transylvania, necrophilia, and the Evil itself. Though I like “Cadavar Christi” a little bit more because of the pressure and aggression it exudes, “The Evil” is still a pretty decent record. No bullshit just Death! Check: www.facebook.com/pages/harm/131650603566081, www.finalgaterecords.com