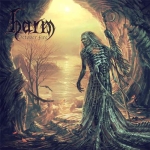 The Norwegian Thrash outfit HARM (still not to be confused with the Death Metal band from Berlin) is not known as a release outputting machine: an album any five years after it took the band nearly a decade to record a full length. Thus it is no wonder that “October Fire” is only the third HARM album in nearly twenty years of existence. Maybe the old saying “Haste makes waste” can be used here, but if this should fit, “October Fire” must be a killer of an album. Well, it isn’t! The album starts off in best SLAYER style with the intro piece of ‘Devastator’ paying tribute to the masters. The song itself however is a little more modern, thankfully not in terms of those shredding new Metal stuff. Bands like DEW-SCENTED come to mind, who took the spirit of Thrash Metal into the new millennium. As good as this start has been, as disappointing the album gets in the long run. With the following two songs ‘Executioner’ and ‘Trying To Grow Wings’, we have to pretty nice songs, yet I feel the urge to file these tunes under: “standard”. And it won’t get much better with the mid paced title track. And it is not just that speed that is lowered in the final five tracks, it’s the level either. Anything sounds rather nice, but so damn exchangeable and standardized, it is really boring to listen to. No riff, no harmony, no vocal line caught my attention. So, I give up resisting and file both HARM and “October Fire” under: “standard”. Ye Thrashers might check: www.harmofnorway.com or www.facebook.com/pages/harm/150631094987927