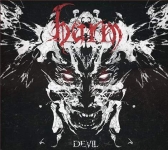 Besides the (meanwhile) quite well known German HARM, there’s also a Norwegian Thrash Metal band of that name. Started in 1997, it took this band nine years and two official demos to release their first album “Devil” in 2006. Since then, they changed their label from Sublife (the label of Tchort) to Battlegod in Australia and released a second album (“Demonic Alliance“, 2011) for them. Now their new label also took charge of all the previous recordings of HARM and put this stuff out as a two-disc set, named after the debut release. The first CD features the whole album “Devil”. And I’m not sure if it was worthwhile to make this album available again. From the first seconds on, HARM present us rather modernised, not too melodic shredding Thrash Metal here. Yeah, “Devil” sounds ultra aggressive and features anything you might want to hear on a Thrash Metal album from the new millennium. Yet, this album really passes me by. There are neither real hooks nor much passages that got my attention. Only ‘Reflection’ really hit my nerve since this one has some nice and subtle guitar leads. And the ultra aggressive closing song ‘Instinctive, Reflex, Revenge’ ain’t that standardised either. As a bonus, this disc features the demo song ‘Intense Replication Of Me’ in a previously unreleased version, that didn’t leave any impression either. The second disc is a little more interesting anyway, both for fans and newbies like me. Here we find the two demos HARM released in 2004 and two even older recordings, most of the songs didn’t make it onto the album. The songs from the “Unleashed” demo are much better than the album, since they are more traditional, especially the opening ‘Planet God’. And ‘Harm Unleashed’ and ‘Intense Replication Of Me’, both from disc one, sound better here as well. And the four songs from “Demo 04” even are much more my speed, since they are rooted in classical 1980s Thrash. Thus even the album highlight ‘Reflection’ sounds better here, spiced with guitar solos and a bigger dose of melodies. ‘Electric Hatred’, ‘Rolling The Dice’ and ‘Twisted Metal Coffin’ walk a similar path, sounding a little antiquated, yet charming. The final two previously unreleased songs are even from 1998, recorded just one year after the formation of HARM. Both ‘Falling Star’ and the long ‘Misery Fields’ show a band on the way to find their own style and somehow remind me of old US Speed / Thrash demos, only the vocals are a little more “evil” here. Though the original album “Devil” passed me by, the demo recordings of the second disc makes this double CD a worthwhile release. Find out more about HARM at www.harmofnorway.com or www.facebook.com/pages/harm/150631094987927 or visit the label: www.battlegod-productions.com