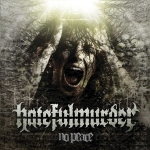 After two EPs and two singles HATEFULMURDER are now unleashing their debut album called "No Peace". A frightening title, but it fits perfectly. If you are into extreme Metal you will definitely find no peace while listening to this output by the four guys from Rio de Janeiro, Brazil. It is a very impressing debut, more than once I thought the guys must be playing together for 20 years or so, but actually the band was formed in 2008. But let’s take a closer look. The opener is some kind of mid-tempo Thrash Metal, not spectacular, but it is the perfect appetizer. During ‘Gates Of Despair’ the speed is forced, the guitars are playing those razor-sharp riffs the genre Thrash Metal is famous for. During ‘Under The Sway Of Plagues’ not only the title reminds me of MORBID ANGEL, but also the double-bass drumming plus the guitar work. Since track-by-track reviews are pretty boring, I will stop here. But every song on this release is a little gem with sophisticated songwriting and top-notch played instruments. Did I mention the versatile and aggressive vocals? The awesome sound blowing your speakers? Guitar melodies reminding of BELPHEGOR or GOD DETHRONED? Thrash Metal never was my favorite style of Metal, or at least not the modern way of Thrash Metal. But this album shows that it is possible to play modern Thrash Metal without tapping into the trap performing boring Metalcore. "No Peace" shows that Thrash Metal with a huge Death Metal influence can be the the hell of a mixture. www.facebook.com/hatefulbook, www.greyhazerecords.com