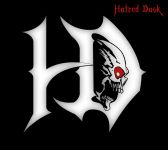 After their 2018 EP “Blinded By Hate”, HATRED DUSK return with a new self-titled full-length released via Mystyk Prod. Already the first tunes show that the guys worked very hard on the new material so ‘Raging Dogs’ became a powerful modern sounding Thrash Metal track with damn good Heavy Metal tunes in the middle and offers a lot of variation to the classic Thrash theme. KREATOR is a good hint to describe their current sound as especially KREATOR’s newer material really catches me so HATRED DUSK brings that kind of Thrash Metal I really enjoy. The second track ‘NWO’ starts slowly with good drumming before turning thrashy again. Once again they can really convince with the cool leads and groovy rhythm guitars. A damn good track and I guess definitely a killer live. ‘Blinded By Hate’ is another fine track and sounds like their personal hommage to mighty british warriors JUDAS PRIEST, a really cool classic Heavy Metal track before ‘Unleash The Dogs Of War’ returns to the classic Thrash Metal theme again with some Hardcore vibes and again the really cool guitar tunes appear which Sami delivers in a similar way in KREATOR nowadays. With ‘Welcome To…’ the guys vary the album a bit with an well-done stringed interlude and some spoken passages before ‘Darkness’ offers classic 80s Thrash again with some Hardcore vibes and Hardcore-esque choruses with killer leads. ‘The Wasteland’ could also easily have fitted on a DEW-SCENTED album, a band I also like a lot and HATRED DUSK deliver the same groovy stuff here. The guys close the album with ‘RATP’, a Hardcore track with French lyrics as far as I can understand. Again the French horde surprised me with a good album which is definitely worth to check for the Thrash fans of our readers. Once again thumbs up to Paris and if I made you curious now, the cure can be found here: www.facebook.com/hatreddusk, http://hatreddusk.bandcamp.com, www.mystykprod.com