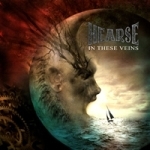 Melodic-Death’n’Rollers HEARSE from Stockholm, Sweden are striking back with their 4th studio album “In These Veins” and new label Dental Records. What? You never heard about this damn cool three piece before! What an omission. HEARSE features legendary vocalist / frontman Johan Liiva (former CARNAGE, FURBOWL and ARCH ENEMY). This man is a living legend in the Death Metal scene. Hell yeah. Furthermore he teamed up with his old FURBOWL buddy Max Thornell on drums again. Both brought the highly talented Mattias Ljung on (lead-) guitar on board and the three are releasing Death Metal classics since 2003. No bullshit! Alrighty. Now you have learned a little bit about HEARSE’s history. Let’s check out the music on “In These Veins”. This album starts with an instrumental introduction, which is pretending the course damn clear. No prisoners on this album. Then it’s going straight into the first song ‘House Of Love’ which is a killer opener with lots of cool melodies and typical Swedish Death Metal riffing. You can’t beat that. 2nd song is called ‘Corroding Armour’ which shows a heavy and filthy Crust Punk side on the riffing and features the damn cool vintage Ace Frehley “KISS – Alive I” guitar solo at the end. Mattias Ljung is showing here once more how many different facets he has. Next one is a real smasher named ‘Intoxication’, which got played on the UFTG open air last year. This is early Hardcore meets Melodic Death Metal at its best and features Jugga of MOB 47 on guest vocals. A real dirty bitch of a song. ‘The Naked Truth’ is a well done song, which includes all necessary ingredients. Unfortunately not that good likes the stuff before. But still better than the songs by thousands of other Death Metal bands. Only Mattias Ljung is kicking ass as usual during his solo parts. Then another cool cover song called ‘Crusade (Gonna Start A Fire)’ by Swedish band SATOR CODEX is setting accents. Damn. This old song fits perfectly to HEARSE’s own material. Here you can listen to the perfect crossover of Death Metal, Hardcore and Punk once more. Thumbs up. The following ‘Among The Forlorn’ is my personal highlight of this CD. What the hell are these guys doing here? This is Melodic Death Metal larger than life. This kinda song a band like ARCH ENEMY for example couldn’t write these days anymore. This song could stand as a prototype for all Melodic Death Metal songs. It includes just everything what a real classic needs. No doubt. With ‘Atrocious Recoil’ the band is providing us with another fine tune. Especially Johan Liiva on vocals and once more Mattias on leads are doing a fantastic job. This one also includes a strong Crust Punk attitude. Great song. With ‘Hearse’ the 3 men wrote their own anthem, or so? This instrumental track shows again the complexity of the band. They can mix all different kind of styles together and in the end you will have one song of a piece. This is something I call skills! The finishing title track ‘In This Veins’ is another unique trip through extreme Metal music and full of maxima. Conclusion: HEARSE did it again. They released another Melodic Death Metal masterpiece, which will stand the test of time very easy. By the way. For all who want to know. The mix on “In These Veins” was done, by no one else, than Mr. Dan Swanö at Unisound Studios, Örebro. Now, please feel free to check out the exciting world of HEARSE at www.hearse.se or www.dentalrecords.se. Support these guys!!!